Salmon fishing in Alaska is an unparalleled experience. No matter your skill level, whether you’re an amateur or a seasoned fisherman,
you’ll discover there is no spot more perfect for fishing than Pybus Point Lodge.

Enjoy the wonderful Alaskan wilderness on our guided salmon fishing trips. Alaska is bursting with wild salmon, as well as many other species of fish. With our experienced, licensed guides, you not only catch fish, but you also get the opportunity to soak up the stunning Alaskan scenery. During the Alaska fishing season, the cold waters off the southeastern coast support five species of Pacific salmon – Chinook, Sockeye, Chum, Pink and Coho -- and depending on when you plan your trip, you may be able hook them all.

Alaska is a year-round destination for anglers, but to ensure your salmon fishing vacation is a success, you’ll need to time it right. Salmon runs begin in May and extend through the end of September, and different species appear at different points throughout the season. Fortunately, the experienced team at Pybus Point Lodge knows when the Alaskan waterways are swimming with each Pacific species.

Alaska’s official state fish, Chinook – also known as King Salmon -- are the ultimate catch for fishing enthusiasts around the world. They’re a challenging species to land due to their formidable size and strength, as the hard-fighting fish can weigh upwards of 50 pounds. The fishing regulations for Chinooks can change regularly in Alaska, and they are never guaranteed, but if you plan your salmon fishing trip with us, our highly skilled guides will do everything possible to help you connect with a King.
‍
Best time to fish for Chinook salmon in Alaska: mid-May through early July.

Among the five species of salmon found in Alaska, Sockeye or Red salmon are by far the most abundant. Millions swarm the waterways of the Inside Passage, but while they’re easy to spot, the 4- to 15-pound fish put up a fight when hooked. And, Sockeyes aren’t just an exciting target – according to many people, they’re the best-tasting species of wild-caught salmon. However, although they are plentily in Alaska, they are the least species found in the waters around Pybus Point Lodge and are not one that we specifically target at Pybus Point.
‍
Best time to fish for Sockeye salmon in Alaska: mid-June through mid-August

Chums, also known as Dog Salmon or Keta Salmon, are among the larger species of salmon that swim the cold waters off Alaska, averaging between 10and 15 pounds and sometimes growing to three times that size. Chum salmon fishing vacations are becoming quite popular, as anglers appreciate thedifficulty of reeling in the strong, aggressive fish – once hooked, chums battle hard and struggle relentlessly to stay in the water. 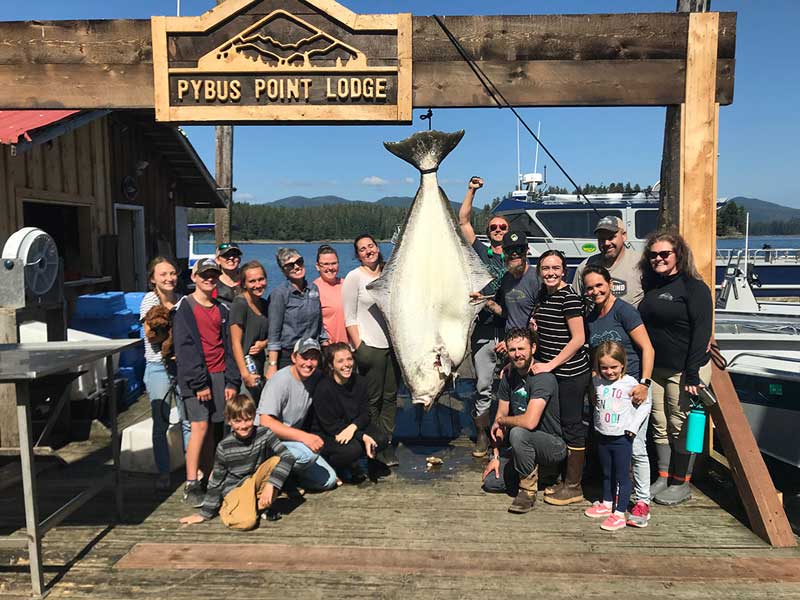 Compared to the other Pacific species, Pinks, or Humpy, salmon are the smallest, with an average weight of about 5 pounds. But their size doesn’t stop anglers on Alaska salmon fishing trips from targeting pinks, as the fish not only fight when hooked – they can also be caught in large numbers. However, because of their unique life cycle, Pink salmon are easier to land in even-numbered years.

Best time to fish for Pink salmon in Alaska: mid-July through the end of August

Fishing enthusiasts consider Coho salmon to be the spunkiest of the Pacific species, as their speed, aerial acrobatics and fighting spirit make them hard to hook – and fun to catch. Also called Silver salmon, these fish typically only weigh in at around 8 to 12 pounds when fully grown, but Coho have been known to take even experienced anglers on a wild ride.  Of all the species of Salmon, Pybus Point Lodge is known for it’s Coho or Silver Salmon runs.

Best time to fish for Coho salmon in Alaska: mid-July through late September

Ready for a day of incredible fishing?

With a knowledgeable guide by your side, reeling in these Pacific Salmon species is relatively easy. Of course, these aren’t the only fish you may encounter when you plan a salmon fishing trip at Pybus Point Lodge -- you can hook halibut, ling cod, rockfish, Pacific cod and several other species, especially during peak fishing season.

Our marvelous guided fishing tours are just part of our all-inclusive vacation packages. When you opt for one of our Alaskan fishing charters, you get transport on a seaplane from Juneau, lodging in brand-new cabins and more.
‍
‍Click here to check out our all-inclusive salmon fishing vacation packages. Your trip to Alaska would not be complete without somewhere to relax and decompress – as fun as it is to spend a day out on the water, fishing can get tiring. Having top-notch accommodations makes all the difference, and Pybus Point Lodge offers the perfect getaway. Our rates include lodging in a gorgeous new cabin nestled in a comfortable, private location as well as reliable Wi-Fi, made-to-order gourmet meals and unlimited snacks.
‍
When we say all-inclusive, we mean it: from boots and harsh-weather wear to high-quality fishing gear and tackle, Pybus Point Lodge has all the equipment you need to fish the coastal waterways of Alaska. We take care of all the fish processing (cleaning, packing, freezing, boxing) for you which make is breeze to bring all the fish you catch back with you!

For an incredible vacation, all you have to do is meet us in Juneau. What are you waiting for? If you want an epic salmon fishing trip in Alaska, check out our rates and book with us at Pybus Point Lodge.

A Boat for all adventures!

CUSTOME BUILT FROM STEM TO STERN

When you fish the waters of Alaska, you need a boat that can handle any situation. That's why we are proud to partner with Wooldridge and ACI boats who provided exceptional service in the boating industry. Our boats have wrap around decks, advanced GPS, and even have a bathroom just in case nature calls. But don't take our word for it, check out our video highlighting what our boats have to offer!

DON’T TAKE OUR WORD FOR IT. CHECK OUT WHAT OUR GUESTS ARE POSTING ON SOCIAL MEDIA:
CUSTOMIZE YOUR ITINERARY

65% OF OUR GUESTS ARE RETURN CUSTOMERS

Discover why people like you can’t stop talking about Pybus Point Lodge. More than 30 years ago, Pybus Point Lodge opened as a simple fishing camp, drawing a devoted following in spite of basic accommodations. With new owners and experienced captains and crew, our corner of Alaska has become an unbeatable all-inclusive fishing and eco-tourism resort.

Pybus Point Lodge has some of the most stunning scenery I’ve ever seen. I mean absolutely breathtaking! In addition to the amazing fishing, I hiked to a beautiful secluded lake, soaked in some hot pots, saw several waterfalls, went whale watching, saw bears and all kinds of wildlife and marine life. As a photographer, photographing a wedding under a waterfall will remain a highlight of my life.

We had the best time! This was our first visit to Pybus, but it definitely will not be our last. The stunning scenery, amazing fishing experience, and the joy of meeting new friends – all outstanding! We did not want to leave!!! If you are thinking about this trip – don’t think any more, just book it. You will not regret it!!!

Trip of a Lifetime!

We had such an amazing time the staff was so wonderful and the lodge was fantastic! capt Joe was so helpful and always doing what ever he could do to make each day special. a special thank you to both Scott and Jody for taking the time to make us feel like family. can't wait to go back next year

We had an amazing business retreat to Pybus Point Lodge.  Everything was top notch... the fishing, the staff, the boat captains, the food, the accommodations, and especially the scenery.    I really liked that Pybus took care of everything from start to finish. Chef John is an amazing cook. We had delicious hot meals the entire trip.  The cabins were amazing and very comfortable.  The fishing was awesome and that’s coming from a guy that doesn’t fish that much.

We brought home 100lbs of fish!

My wife and I spent a week at Pybus Point this Summer. We had a beautiful, private room overlooking the bay and our own new, ensuite, private bathroom. What an amazing place for couples to get away together. We set our own breakfast time, met our boat captain after, fished the day along, and returned to clean up and enjoy a nice dinner at the restaurant. Next time Alaska is on the trip list, Sherrie and I will go together, and it will be to Pybus Point!

This was my first trip to Pybus Point. I stayed in one of their new cabins. The accommodations were incredible, the view onto the bay in the mornings was stunning. I loved the staff and the food was really very good. All of this and they have new boats to take you out onto fairly calm waters to fish. The fishing guides were great. Overall a great experience. Definitely going back.

Feel free to email us, smoke signal us, carrier pigeon us, or visit us!
Fill out our nifty contact form below and get started today!
Thank you! Your submission has been received!
Oops! Something went wrong while submitting the form.